English
NEWS DETAIL
You are here: Home » News » How does rocker arm work?

How does rocker arm work?

A rocker arm is a valvetrain component in internal combustion engines. Rocker arms were first invented in the 19th century and have changed little in function since then. Improvements of rocker arms have been made, however, in both efficiency of operation and construction materials. Many modern rocker arms are made from stamped steel, though some applications can make use of heavier duty materials.

l How does rocker arm work?

l What are the faults of rocker arm?

l What are the reasons of bad rocker arm? How does rocker arm work?

As the rocker arm is acted on by a camshaft lobe, it pushes open either an intake or exhaust valve. Rocker arm allows fuel and air to be drawn into the combustion chamber during the intake stroke or exhaust gases to be expelled during the exhaust stroke.

In many internal combustion engines, rotational motion is induced in the crank shaft as the pistons cause it to rotate. This rotation is translated to the camshaft via a belt or chain. In turn, lobes on the camshaft are applied to push open the valves via rocker arms, which can be achieved either through direct contact between a camshaft lobe and rocker arm or indirectly though contact with a lifter driven pushrod.

Throughout the application of the rocker arm, the function of rocker arm has been studied and improved upon. These improvements have resulted in rocker arms that are both more efficient and more resistant to wear. Some designs can actually use two rocker arms per valve, while others utilize a rundle roller bearing to depress the valve. These variations in design can result in rocker arms that look physically different from each other, though every rocker arm still performs the same basic function.

Since energy is required to move a rocker arm and depress a valve, their weight can be an important consideration. If a rocker arm is excessively heavy, too much energy will be required to move, which may prevent the engine from achieving the desired speed of rotation. The strength of the material can also be a consideration because weak material may stress or wear too quickly. Many automotive applications make use of forged steel for these reasons, as this material can balance the weight and durability. 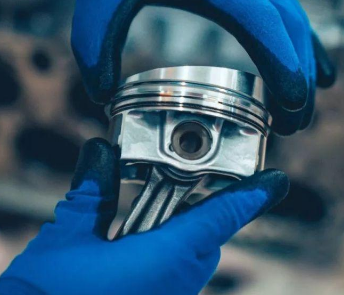 What are the faults of rocker arm?

Although rocker arms are not considered as important as other parts of the internal combustion engine’s system, they still perform a vital function in your car. Without the rocker arm, you would not be able to run car properly because a damaged rocker arm can lead to a less than optimal engine performance or engine failure if you let a damaged rocker arm go on for too long without fixing.

Clicking Noises: Loud and unusual noises that come from the internal combustion section of engine, like a fast-clicking sound, can refer to a damaged rocker arm and the surrounding parts. Damaged rocker arms can become stuck during rotation, causing a clicking noise.

Weak engine: If you feel like engine is not accelerating as quickly as it normally does, does not contain the same horsepower, does not have the power to go up hills or pass other cars, and is lagging behind, then this could be a sign of a faulty rocker arm. The reduced engine efficiency is due to a faulty rocker arm preventing proper timing of the opening and closing of the valve, leading to the engine stalling if the issue is not taken care of.

Engine stalling: Similar to the weak engine performance and the engine deterioration. If you find that engine is frequent stalling when you are trying to start your car, accelerate, or drive at high speeds, this is a common sign that you have let a bad rocker arm go on for too long without any fixes.

Physical damage: One of the most noticeable signs by a mechanic that the rocker arms have become damaged due to consistent use is that there are cracks, holes, or clear signs of wear and tear on the rocker arm. After removing the valve cover, look for metal-on-metal contact or debris that has built up on the pivot point or in the valves, harming the rocker arm function.

What are the reasons of bad rocker arm?

Poor fuel: If you use poor fuel or the incorrect type of fuel for your car, this can hurt rocker arm and cause the valve to remain in the open position. Poor fuel can be caused by a dirty fuel injector, which can be seen by the engine misfiring, the rough engine idling, and the gas mileage decreasing.

Debris in oil: The oil that has been contaminated or contains too much dirt can prevent a seamless oil flow and lead to a damaged rocker arm. Some signs of dirty engine oil are that your dipstick shows an improper color of oil, you hear engine knocking or loud sounds coming from your engine, there are oil smells within the cabin, or you notice a smoky and black exhaust.

Bent valve: Another reason for rocker arm failing and causing a valve to remain open is a bent valve. A bent valve can be caused by a few key problems, like your engine over-revving, not being repaired at the right intervals, and issues during an engine rebuild. During an engine rebuild, there might not be enough space left between the piston and valves to ensure the valves are aligned with the intake and exhaust valves. In this case, the bent valve will cause rocker arm damage and lead to reduced engine performance.

Valve seat dislodging: If the valve seat moves out of the proper place during use, it can cause the rocker arm to become damaged and cause the valve to remain open. You will be able to tell if the seat is dislodged by checking for if the rocker arm is broken, if the valves have been inspected in the last maintenance period, and if your engine has plenty of oil and fluids.

Learn more something about rocker arm can know how does rocker arm work and the faults of rocker arm. If you want to buy high-quality rocker arm machine,motorcycles part, CNC machining products with reasonable price, Zhongshan Shengguan Hardware Products CO., LTD. can help you to open up a further and larger market, it is wise to choose us as your business partner. We provide different types of rocker arm machines by contacting us online.